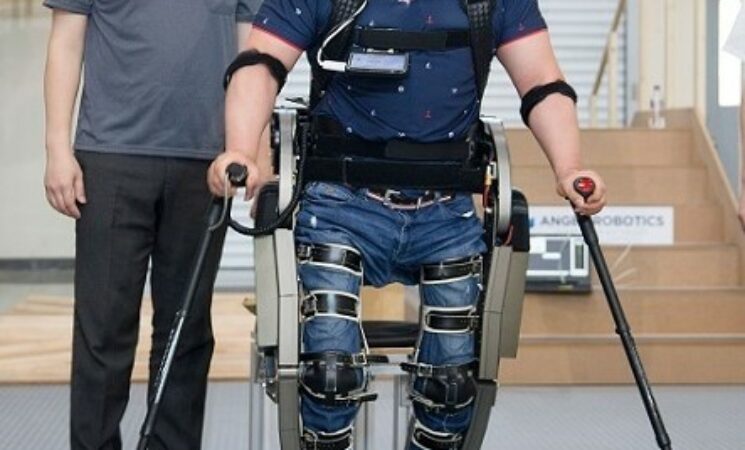 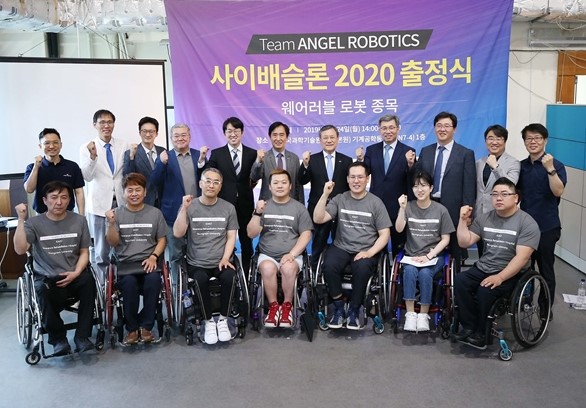 (Seven pilots and Professor Kong (fifth from left in second row) pose with guests who joined the Cybathlon 2020 kickoff ceremony.

President Shin (fifth from right) made a congratulatory remarks during the ceremony.)

Standing upright and walking alone are very simple but noble motions that separate humans from many other creatures. Wearable and prosthetic technologies have emerged to augment human function in locomotion and manipulation. However, advances in wearable robot technology have been especially momentous to Byoung-Wook Kim, a triplegic for 22 years following a devastating car accident.

Now Kim and Professor Kong’s team are all geared up for the Cybathlon Championship 2020. Professor Kong and his startup, Angel Robotics, held a kickoff ceremony for Cybathlon 2020 at KAIST on June 24. The 2020 championship will take place in Switzerland.

Only pilots with complete paralysis of the legs resulting from spinal cord injuries are eligible to participate in the Cybathlon, which takes place every four years. Pilots compete against each other while completing everyday tasks using technical assistance systems in six different disciplines: a brain-computer interface race, a functional electrical stimulation bike race, a powered arm prosthesis race, a powered leg prosthesis race, a powered exoskeleton race, and a powered wheelchair race. The 2016 championship drew 66 pilots from 56 teams representing 25 countries.

In the powered exoskeleton race, pilots complete everyday activities such as getting up from a sofa and overcoming obstacles such as stairs, ramps, or slopes and up to four pilots compete simultaneously on tracks to solve six tasks; and the pilot that solves the most tasks in the least amount of time wins the race. 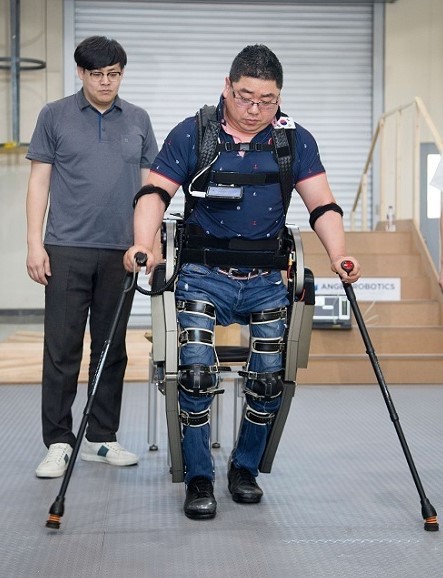 (Kim, a triplegic for 22 years demonstrates walking and climbing the stairs (below photo) wearing the WalkOn Suit

during the media day for the Cybathlon 2020 kickoff ceremony on June 21 at KAIST.)

Kim, who demonstrated walking and climbing the stairs wearing the WalkON Suit during the media day for the Cybathlon 2020 kickoff ceremony on June 21 at KAIST, said, “I have been confined to a wheelchair for more than 20 years. I am used to it so I feel like the wheelchair is one of my body parts. Actually, I don’t feel any big difficulties in doing everyday tasks in wheelchair. But whenever I face the fact that I will never be able to stand up with my own two legs again, I am so devastated.”

He continued, “I still remember the day when I stood up with my own two legs by myself after 22 years by wearing this robot. It was beyond description.”

The market for wearable robots, especially for exoskeleton robots, is continuing to grow as the aging population has been a major challenge in almost every advanced country. The global market for these robots expects to see annual growth of 41.2% to 8.3 billion US dollars by 2025. Healthcare wearable robots for the elderly and rehabilitation take up the half of the market share followed by wearable robots for industrial and defense purposes.

Professor Kong from the Department of Mechanical Engineering and his colleagues have developed two wearable robot systems in 2014: The "WalkON Suit" for complete paraplegics and “Angel Suit” for those with partial impairment in walking ability such as the elderly and rehabilitation patients.

Professor Kong said after 15 years of basic research, the team is now able to develop its own distinct technologies. He said their robots are powered by non-resistant precision drives with algorithms recognizing the user’s moving intention. Incorporated with prosthetic devices technology from the Severance Rehabilitation Hospital, their control technology has led to the production of a customizable robot suit optimized for each user’s physical condition.

The WalkON Suit, which boasts a maximum force of 250 Nm and maximum rotation speed of 45 RPM, gives the user high-energy efficiency modeled after the physiology of the human leg. It allows users to walk on flat ground and down stairs, climb up and down inclines, and sit and lie down. Currently the battery lasts five to six hours for locomotion and the approximate 25 kg of robot weight still remains a technical challenge to upgrade.

Professor Kong’s team has grafted AR glass technology into the WalkOn Suit that one of his pilots put on for the torch relay of the PyongChang Paralympics in 2018. His team is now upgrading the WalkON Suit 4.0 for next year’s competition. Severance Rehabilitation Hospital will help the seven pilots with their training.

Professor Kong said his goal is to make robots that can make people with disabilities much more independent. He stressed, “Wearable robots should be designed for each single user. We provide a very good graphical user interface so that we can design, check, and also verify our optimized design for users’ best performance.”