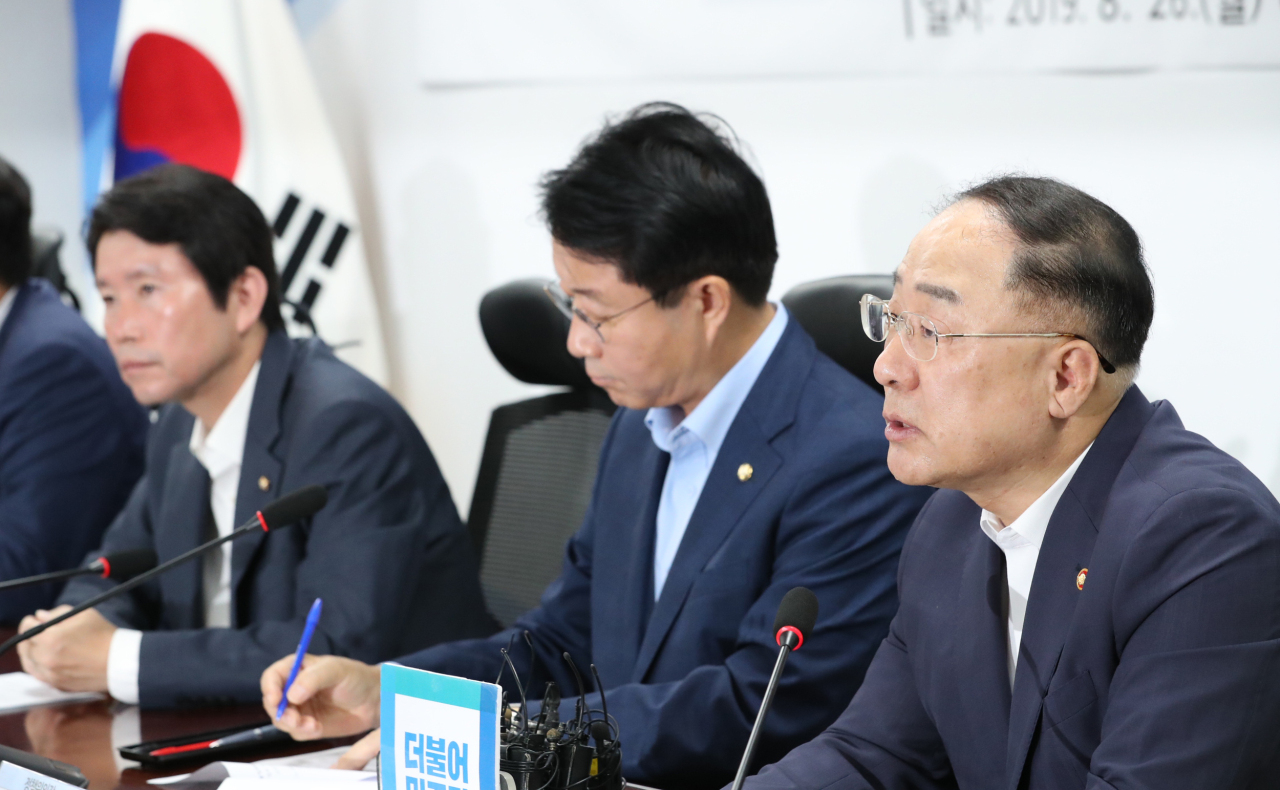 South Korea’s government said Monday that it will insert more than 2 trillion won ($1.64 billion) of the budget next year to help local industries respond to Japan’s economic retaliations and consequent challenges on trade fronts.

Also, President Moon Jae-in subscribed to an equity fund that invests in local materials and parts makers, in a supportive gesture for such aggressive fiscal actions.

“(The government) will play its due fiscal role, even at the cost of temporary fiscal deficit,” said Deputy Prime Minister and Finance Minister Hong Nam-ki in a meeting with lawmakers of the ruling Democratic Party of Korea.

“We tried to draft as expansionary a state budget as possible for next year, reflecting the government’s strong will to revitalize the economy.”

Rep. Cho Jeong-sik, the party’s chief policymaker, also said in a separate press briefing that additional reserve funds will be used to respond to the escalating economic conflict with Japan.

“We agreed to add at least 2 trillion won to help local parts, materials and machines makers respond to Japan’s trade retaliations, which has become the top priority economic agenda,” the lawmaker said.

“The given amount will be drafted as reserve funds, so that (the government) may respond on time, should situations change further.”

The Ministry of Economy and Finance said last week that it will raise next year’s budget to 513 trillion won, up 9 percent from this year.

The draft budget bill, once approved by the National Assembly, will bring the country’s national debt to 39 percent of its gross domestic product next year, up from 37.2 percent this year.

Despite opposition and concerns, Seoul’s fiscal policymakers have been leaning toward expansionary actions, amid mounting external factors ranging from the US-China trade friction and Japan’s expanded trade curbs against Korea.

Asia’s fourth-largest economy saw its exports slip 13.3 percent during the first 20 days of August from a year earlier, remaining on a steady decline since December last year.

Also, the Bank of Korea slashed its outlook for the country’s economic growth pace for this year to 2.2 percent from the earlier 2.5 percent.

“Considering these downside risks, it is more important than ever to assume an aggressive fiscal role now and next year,” Hong said.

The ministry is planning to submit its budget bill to the parliament on Sept. 3, along with the tax revision bill and the five-year fiscal operation road map, the fiscal chief added.

While the ministry set to pushing ahead with its expansionary fiscal strategy, President Moon visited the headquarters of NH NongHyup Bank to subscribe to an equity fund that invests in local parts and materials makers.

“It was to display (the president’s) determination to support local industries and to stand together against Japan’s economic retaliations,” said Cheong Wa Dae.