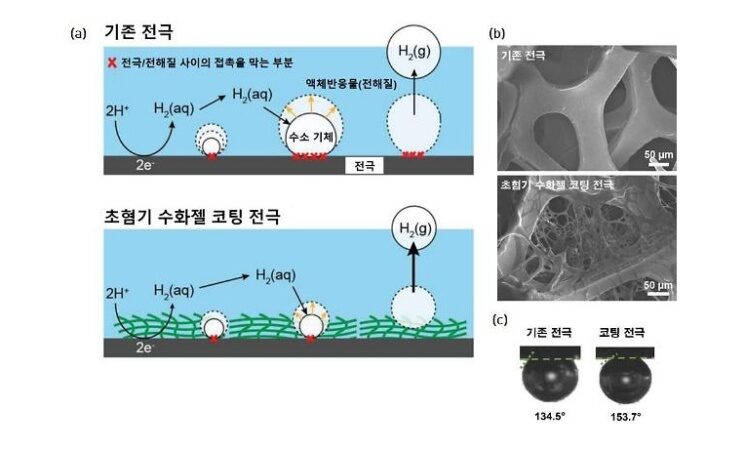 South Korean researchers have developed a coating technique that will grant electrodes used in green hydrogen production to have gas-repellant properties. The so-called superaerophobic characteristics can enhance the electrochemical performance of electrodes. The production of aerophobic material-coated electrodes is very simple and cheap compared to similar conventional techniques.

Green hydrogen is produced through electrolysis using electricity generated from renewable energy sources. When water is split by electricity, gasified oxygen and hydrogen stick to electrodes inside water in form of gas bubbles. Such bubbles lower the performance of electrolysis and overload electrodes. Hydrophilic materials, meaning materials with a strong affinity for water, have aerophobic capabilities that repel gases while attracting liquid.

Currently, electrolysis hydrogen production technique developers are adopting various techniques like using ultrasound to shake gas bubbles off from electrodes or using specially designed nanostructures on electrodes to make it harder for bubbles to stay on the metal rods. However, implementing such techniques was not ideal for commercialization because they were expensive and required complex methods. Rare metals such as palladium and platinum are used for catalysts but they are very expensive.

Researchers at the Ulsan National Institute of Science and Technology (UNIST) found the key to easily preventing gas bubbles from sticking onto electrodes by coating the metal rods with porous hydrophilic hydrogel. The researchers said that the hydro gel-coated electrodes showed 150 percent improved hydrogen production than electrocatalysts made of ruthenium known to have one of the highest hydrogen production efficiency.

"Just by coating electrodes with hydrophilic hydrogel, we were able to achieve the same hydrogen evolution reaction level induced by rare-metal catalysts," UNIST said in a statement released on August 8.