(from left: Seunggyu Kimand Professor Jessie Sungyun Jeon)
A KAIST research team developed a microfluidic-based drug screening chip that identifies synergistic interactions between two antibiotics in eight hours. This chip can be a cell-based drug screening platform for exploring critical pharmacological patterns of antibiotic interactions, along with potential applications in screening other cell-type agents and guidance for clinical therapies.
Antibiotic susceptibility testing, which determines types and doses of antibiotics that can effectively inhibit bacterial growth, has become more critical in recent years with the emergence of antibiotic-resistant pathogenic bacteria strains.
To overcome the antibiotic-resistant bacteria, combinatory therapy using two or more kinds of antibiotics has been gaining considerable attention. However, the major problem is that this therapy is not always effective; occasionally, unfavorable antibiotic pairs may worsen results, leading to suppressed antimicrobial effects. Therefore, combinatory testing is a crucial preliminary process to find suitable antibiotic pairs and their concentration range against unknown pathogens, but the conventional testing methods are inconvenient for concentration dilution and sample preparation, and they take more than 24 hours to produce the results.
To reduce time and enhance the efficiency of combinatory testing, Professor Jessie Sungyun Jeon from the Department of Mechanical Engineering, in collaboration with Professor Hyun Jung Chung from the Department of Biological Sciences, developed a high-throughput drug screening chip that generates 121 pairwise concentrations between two antibiotics.
The team utilized a microfluidic chip with a sample volume of a few tens of microliters. This chip enabled 121 pairwise concentrations of two antibiotics to be automatically formed in only 35 minutes.
They loaded a mixture of bacterial samples and agarose into the microchannel and injected reagents with or without antibiotics into the surrounding microchannel. The diffusion of antibiotic molecules from the channel with antibiotics to the one without antibiotics resulted in the formation of two orthogonal concentration gradients of the two antibiotics on the bacteria-trapping agarose gel.
The team observed the inhibition of bacterial growth by the antibiotic orthogonal gradients over six hours with a microscope, and confirmed different patterns of antibiotic pairs, classifying the interaction types into either synergy or antagonism.
Professor Jeon said, “The feasibility of microfluidic-based drug screening chips is promising, and we expect our microfluidic chip to be commercialized and utilized in near future.”
This study, led by Seunggyu Kim, was published in Lab on a Chip (10.1039/c8lc01406j) on March 21, 2019.
Figure 1. Back cover image for the “Lab on a Chip”. 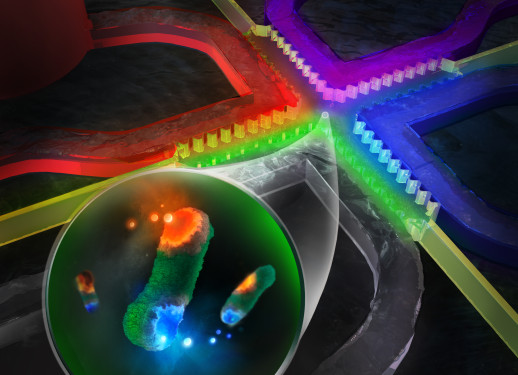 Figure 2. Examples of testing results using the microfluidic chips developed in this research. 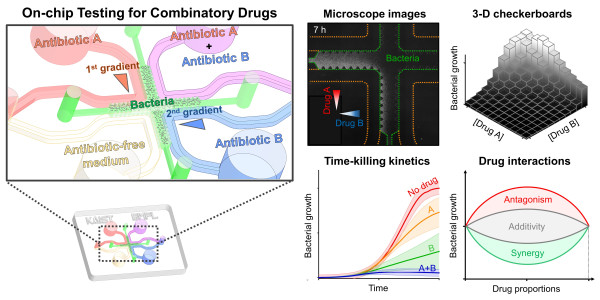