The author of the “Green growth” concept asserts that the key to developing supergrids is private initiative driven by breakthrough technologies. Investors will then push for political agreement between countries

Both European and Asian experts are focusing on the challenging tasks of system integration and transmission of renewable energy over long distances. High Voltage Direct Current (HVDC) grid technologies could be the solution. These lines can transmit electricity to distant places with minimum power loss.

Recently, a Franco-Spanish project to lay a 370 km subsea power cable across the Bay of Biscay secured a record-breaking EU grant worth €578 million. In parallel, the Asia Super Grid project, involving Japan, China, South Korea, and Russia, has also been gaining international political and financial support. Participants see this project as a measure to bolster energy security and deepen regional integration.

We talked about sustainable development and supergrids with Rae Kwon Chung, who, like Al Gore, was awarded the 2017 Nobel Peace Prize as a member of the Intergovernmental Panel on Climate Change (IPCC). He is the author of the “Green growth” concept, whereby countries should enable natural assets to deliver their full economic potential on a sustainable basis. Environmental protection should not be a barrier to economic growth as long as governments go beyond pollution control and implement policies to stimulate markets for eco-friendly goods and services. 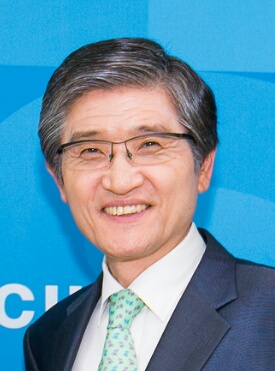 To begin with, do you think that your native South Korea is organising “green”, sustainable Olympics?
Yes, I think they have taken some important measures. For example, a railway has recently been finished that runs directly from the airport to the Olympic site more than 100 kilometres away. This will allow people to get to the Games in a more ecological way than driving cars. I’m very glad they’ve completed it on time.

What are the main barriers in the shift to Green growth in Europe and in Asia?
A very good question. I’ve always thought that emphasis has been on short-sighted economic policy, like Donald Trump who pushes for quick wins for US companies. When he talks about “America first”, he means American companies’ profit first, which is a short-term interest. But Green growth is about long-term, not short-term profit, that’s the difference. If you look at solar panels and renewable energy, or electric cars, all these green products have their potential, but they can be only realised in the long run.

Subsidies and policies are necessary if the future market is to grow. Governments, including perhaps those in Europe, should be investing money patiently. A green economy is like education: it requires 20 years of upfront investment and only afterwards do you reap your reward.

What are the main global and local drivers behind the development of supergrids in Europe and Asia?
I would say that first there were technological innovations, including the ultra-high voltage electricity transmission. Later, some private investors found the idea of HVDC supergrids attractive and put it on the political agenda, because their development requires a political agreement between countries. For example, in the case of the Asia Super Grid, about 100 GW wind and solar power from Mongolia will be supplied to China, South Korea, Japan and Russia.

The main initiative came from Japanese businessman Masayoshi Son, and then the countries agreed to support his idea. He is thinking about 250 billion dollars for the project but he argues that it can be profitable. So some of these visionary businessmen can play a very important role in my opinion.

Another important driver for such green projects is political will. A good illustration here is the proposal by the former French president, François Hollande. After the Paris Agreement was adopted, he suggested the creation of a global coalition of like-minded countries with common carbon taxation. It would allow European states to finance green projects.

But his successor has already forgotten about it, which is very sad. I think common tax is one of the most important policy tools for promoting a green economy and green growth, but it is not very popular. And I don’t think we can have a global consensus at UN level to introduce it. That’s why it’s important that the major developed countries come together to promote the tax. And the European Commission can and should play a very important role in this.

What roles will supergrids and microgrids, which are developing in parallel now, have in the future power system?
Microgrids, which are distributed energy systems, are very interesting and the potential is there. Like supergrids, they can complement each other and play a very important role. But expectations are greater for supergrids due to the amount of energy they can transport.

What are the short-term and long-term effects that the countries linked by super grids can expect?
The countries that will export the electricity produced from renewable sources can enjoy a wide range of positive effects. These include huge revenues, employment, internal electricity provision, and other economic benefits.

Importers, on the other hand, will be able to improve their ecological conditions. For example, China suffers much from air pollution caused by fossil fuels but if it can access renewable energy from Mongolia or Kazakhstan, it will be able to reduce its fuel consumption.

As you know, the problem with renewable energy, either wind or solar, is that it requires a lot of space to generate big amounts of power. In very crowded cities like Beijing or Shanghai you cannot find those spaces, so that’s why a supergrid can play a very important role in connecting places thousands of kilometres away. It’s a very interesting idea to link countries and get mutual benefits.

What challenges do you see in the development of European supergrids?
I’ve heard about many supergrid concepts in Europe. For example, there was a promising idea to link the solar panels in the Sahara desert to continental Europe. These projects were proposed a long time ago, but they met some political and technological barriers. Now these issues are being solved, so the future of European supergrids is a matter of political support and private investment.

What are the chances of connecting the Asian and European supergrids, or even creating a global supergrid?
I think it’s possible, but it will take a long time. Sooner or later we have to see some examples. A good model project is needed. If successful, it will stimulate more countries to follow.