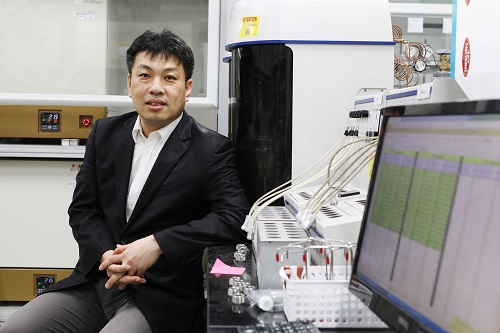 (Professor Jinwoo  Lee from the Department of Chemical and Biomolecular Engineering)
A KAIST research team doped nitrogen and boron into graphene to selectively increase peroxidase-like activity and succeeded in synthesizing a peroxidase-mimicking nanozyme with a low cost and superior catalytic activity. These nanomaterials can be applied for early diagnosis of Alzheimer’s disease.
Enzymes are the main catalysts in our body and are widely used in bioassays. In particular, peroxidase, which oxidizes transparent colorimetric substrates to become a colored product in the presence of hydrogen peroxide, is the most common enzyme that is used in colorimetric bioassays.
However, natural enzymes consisting of proteins are unstable against temperature and pH, hard to synthesize, and costly. Nanozymes, on the other hand, do not consist of proteins, meaning the disadvantages of enzymes can be overcome with their robustness and high productivity. In contrast, most nanonzymes do not have selectivity; for example, peroxidase-mimicking nanozymes demonstrate oxidase-like activity that oxidizes colorimetric substrates in the absence of hydrogen peroxide, which keeps them away from precisely detecting the target materials, such as hydrogen peroxide.
Professor Jinwoo Lee from the Department of Chemical and Biomolecular Engineering and his team were able to synthesize a peroxidase-mimicking nanozyme with superior catalytic activity and selectivity toward hydrogen peroxide. Co-doping of nitrogen and boron into graphene, which has negligible peroxidase-like activity, selectively increased the peroxidase-like activity without oxidase-like activity to accurately mimic the nature peroxidase and has become a powerful candidate to replace the peroxidase.
The experimental results were also verified with computational chemistry. The nitrogen and boron co-doped graphene was also applied to the colorimetric detection of acetylcholine, which is an important neurotransmitter and successfully detected the acetylcholine even better than the nature peroxidase.
Professor Lee said, “We began to study nanozymes due to their potential for replacing existing enzymes. Through this study, we have secured core technologies to synthesize nanozymes that have high enzyme activity along with selectivity. We believe that they can be applied to effectively detect acetylcholine for quickly diagnosing Alzheimer’s disease.
This research, led by PhD Min Su Kim, was published in ACS Nano (10.1021/acsnano.8b09519) on March 25, 2019.
Figure 1. Comparison of the catalytic activities of various nanozymes and horseradish peroxidase (HRP) toward TMB and H₂O₂ 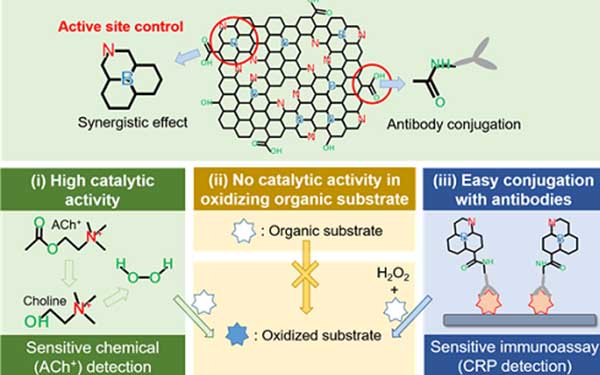