Lens-free OLEDs with Efficiency comparable to that of Inorganic LEDs 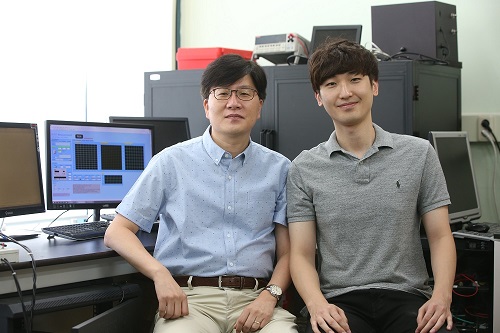 (from left: Professor Seunghyup Yoo and PhD candidate Jinouk Song)
The use of organic light-emitting diodes (OLEDs) has extended to various applications, but their efficiency is still lagging behind inorganic light-emitting diodes. In this research, a KAIST team provided a systematic way to yield OLEDs with an external quantum efficiency (EQE) greater than 50% with an external scattering medium.
Having properties suitable for thin and flexible devices, OLEDs are popular light sources for displays, such as mobile devices and high quality TVs. In recent years, numerous efforts have been made to apply OLEDs in lighting as well as light sources for vehicles.
For such applications, high efficiency is of the upmost importance for the successful deployment of light sources. Thanks to continuous research and the development of OLEDs, their efficiency is steadily on the rise, and a level equivalent to inorganic LEDs has been demonstrated in some reports.
However, these highly efficient OLEDs were often achieved with a macroscopic lens or complex internal nanostructures, which undermines the key advantages of OLEDs as an affordable planar light sources and tends to hinder their stable operation, thus putting a limitation to their commercialization.
Among various methods proven effective for OLED light extraction, a team led by Professor Seunghyup Yoo at the School of Electrical Engineering focused on the external scattering-based approach, as it can maintain planar geometry and compatibility with flexibility. It is also able to be fabricated on a large scale at a low cost and causes no interference with electrical properties of OLEDs.
Conventionally, research on enhancing OLED light extraction using light scattering has been conducted empirically in many cases. This time, the team developed comprehensive and analytical methodology to theoretically predict structures that maximize efficiency.
Considering OLEDs with the external scattering layers as a whole rather than two separate entities, the researchers combined the mathematical description of the scattering phenomena with the optical model for light emission within an OLED to rapidly predict the characteristics of many devices with various structures. Based on this approach, the team theoretically predicted the optimal combination of scattering layers and OLED architectures that can lead to the maximum efficiency.
Following this theoretical prediction, the team experimentally produced the optimal light scattering film and incorporated it to OLEDs with orange emitters having a high degree of horizontal dipole orientation. As a result, the team successfully realized OLEDs exhibiting EQE of 56% and power efficiency of 221 lm/W. This is one of the highest efficiencies ever realized for an OLED unit device without the help of a macroscopic lens or internal light extraction structures.
Professor Yoo said, “There are various technologies developed for improving OLED light extraction efficiency; nevertheless, most of them have not reached a level of practical use. This research mainly provides a systematic way to attain an EQE of 50% or higher in OLEDs while keeping in mind the constraints for commercialization. The approach shown here can readily be applied to lighting devices or sensors of wearable devices.”.
This research, co-led by Professor Jang-Joo Kim from Seoul National University and Professor Yun-Hi Kim from Gyeongsang National University, was published in Nature Communications on August 10, 2018. (J. Song et al. Nature Communications, 9, 3207. DOI: 10.1038/s41467-018-05671-x)
Figure 1.Photographs of OLEDs with SiO₂ -embedded scattering layers according to scatterance