A Molecular Sensor for In-Situ Analysis of Complex Biological Fluids

A KAIST research group presented a molecular sensor with a microbead format for the rapid in-situ detection of harmful molecules in biological fluids or foods in a collaboration with a Korea Institute of Materials Science (KIMS) research group. As the sensor is designed to selectively concentrate charged small molecules and amplify the Raman signal, no time-consuming pretreatment of samples is required.

Raman spectra are commonly known as molecular fingerprints. However, their low intensity has restricted their use in molecular detection, especially for low concentrations. Raman signals can be dramatically amplified by locating the molecules on the surface of metal nanostructures where the electromagnetic field is strongly localized. However, it is still challenging to use Raman signals for the detection of small molecules dissolved in complex biological fluids. Adhesive proteins irreversibly adsorb on the metal surface, which prevents the access of small target molecules onto the metal surface. Therefore, it was a prerequisite to purify the samples before analysis. However, it takes a long time and is expensive.

A joint team from Professor Shin-Hyun Kim’s group in KAIST and Dr. Dong-Ho Kim’s group in KIMS has addressed the issue by encapsulating agglomerates of gold nanoparticles using a hydrogel. The hydrogel has three-dimensional network structures so that molecules smaller than the mesh are selectively permeable. Therefore, the hydrogel can exclude relatively large proteins, while allowing the infusion of small molecules. Therefore, the surface of gold nanoparticles remains intact against proteins, which accommodates small molecules. In particular, the charged hydrogel enables the concentration of oppositely-charged small molecules. That is, the purification is autonomously done by the materials, removing the need for time-consuming pretreatment. As a result, the Raman signal of small molecules can be selectively amplified in the absence of adhesive proteins.

Using the molecular sensors, the research team demonstrated the direct detection of fipronil sulfone dissolved in an egg without sample pretreatment. Recently, insecticide-contaminated eggs have spread in Europe, South Korea, and other countries, threatening health and causing social chaos. Fipronil is one of the most commonly used insecticides for veterinary medicine to combat ﬂeas. The ﬁpronil is absorbed through the chicken skin, from which a metabolite, ﬁpronil sulfone, accumulates in the eggs. As the ﬁpronil sulfone carries partial negative charges, it can be concentrated using positively-charged microgels while excluding adhesive proteins in eggs, such as ovalbumin, ovoglobulin, and ovomucoid. Therefore, the Raman spectrum of fipronil sulfone can be directly measured. The limit of direct detection of fipronil sulfone dissolved in an egg was measured at 0.05 ppm.

Professor Kim said, “The molecular sensors can be used not only for the direct detection of harmful molecules in foods but also for residual drugs or biomarkers in blood or urine.” Dr. Dong-Ho Kim said, “It will be possible to save time and cost as no sample treatment is required.”

This research was led by graduate student Dong Jae Kim and an article entitled “SERS-Active Charged Microgels for Size- and Charge-Selective Molecular Analysis of Complex Biological Samples” was published on October 4, 2018 in Small and featured on the inside cover of the journal.

Figure 1. Schematic illustrating the concentration of charged small molecules and the exclusion of large adhesive proteins using a charged hydrogel microbead containing an agglomerate of gold nanoparticles. The Raman signal of the small molecules is selectively amplified by the agglomerate. 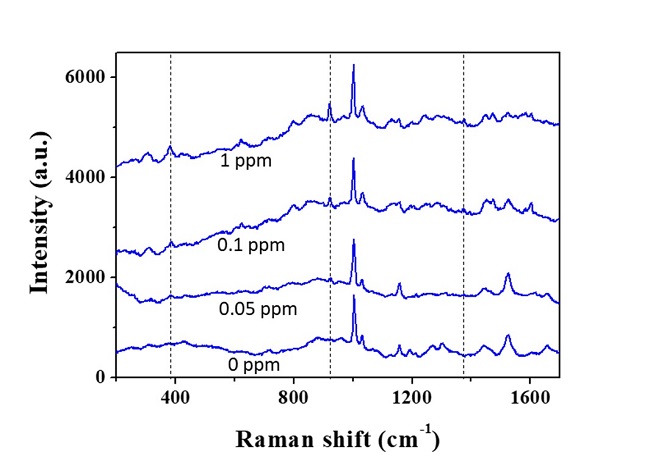