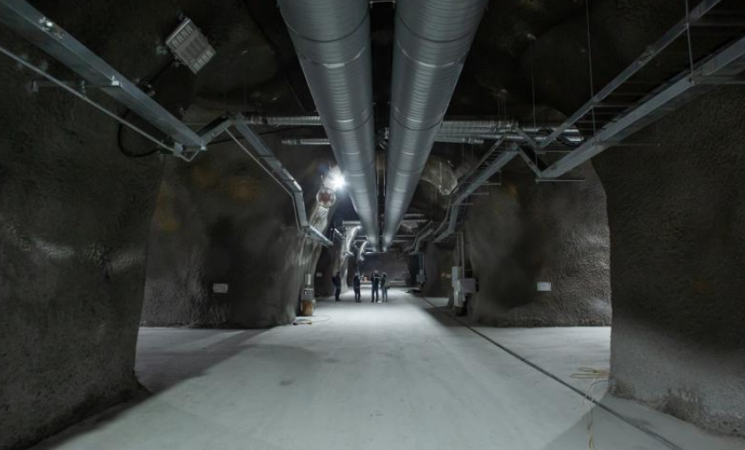 The Ministry of Science and ICT and Institute for Basic Science (IBS) on Oct. 5 held a ceremony to mark the completion of the underground Yemi Lab in Jeongseon-gun County, Gangwon-do Province.

Located 1,000 m underneath the county's Yemisan Mountain, the lab is the country's deepest underground lab. Covering about 3,000 square m in area, it is also the sixth-largest lab of its kind in the world.

The IBS from next year will launch research on dark matter and neutrinos.

Detecting unidentified dark matter and measuring the mass of neutrinos, aka "ghost particles," hold the keys to understanding the creation and composition of the universe and are considered the greatest tasks in modern physics.

Background noise and cosmic rays must be minimized as much as possible to detect signals from dark matter and neutrinos, and this is why globally renowned groups for physics research are building underground labs.

The IBS had conducted research in an underground lab in Yangyang-gun County, Gangwon-do, located 700 m underground and covering 300 square m. Both this lab's depth and area, however, were insufficient for proper research.

Last month, infrastructure for next-generation large-capacity detectors and renovation of the ground lab were completed.

The IBS will move the research equipment from its Yangyang-gun lab to Yemi Lab and jointly use the latter with other institutions like the National Institute for Mathematical Sciences, Kyungpook National University and Korea Atomic Energy Research Institute.

First Vice Minister of Science and ICT Oh Tae-Seog said, "A massive research facility is essential for world-class research results in specific fields of basic science," adding, "We hope that researchers from both home and abroad conduct joint research at Yemi Lab and that the lab develops into a more global research space."