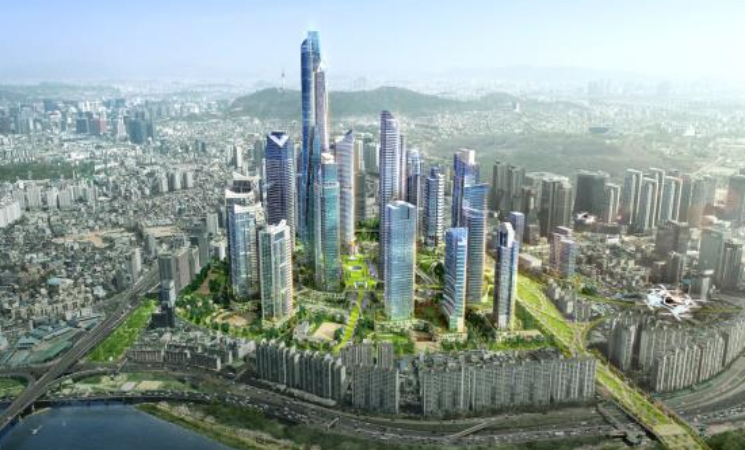 The Seoul Metropolitan Government announced its development plan to turn massive idle land near Yongsan Station in central Seoul into the “Asian Silicon Valley” and a city transportation hub.

In a press briefing on Tuesday(26 Jul), Seoul Mayor Oh Se-hoon said the government will transform the area into an “international business district as a new center for global urban competitiveness and technological innovation.”

The Seoul city government will develop the area, which is a 493,000-square-meter place near Yongsan Station. The site has been idle for around 10 years after a major urban development project was abandoned in 2013.

In 2007, Oh first proposed a 31 trillion won ($23.6 billion) development project for the area, but it failed to go through largely due to flat real estate market prospects and conflicts among state-run stakeholders, private investors and local government.

This time, the Seoul city government has chosen to reduce business risks by dividing the 493,000-square-meter regions into different sectors and developing them separately. Seoul Housing & Communities Corporation and Korail are expected to forge a joint unit to spearhead the development.

The Seoul city government currently aims to start constructing infrastructure in 2024 and begin the development of the main sector in 2025.

The public sector plans to invest around 12 trillion won of assets -- including the land owned by SH and Korail -- into the development project and later attract investments from the private sector.

Korail and SH own 72 percent and 23 percent, respectively, of the 493,000-square-meter land, which is estimated to be worth some 7 trillion won.

Oh said the city government will turn the region into an international business district that can host foreign enterprises, particularly tech firms. According to the city‘s plan, around 70 percent of the buildings will be used for non-residential purposes. Commercial buildings and venues for meetings, incentives, conferences, and exhibitions will be built. Hotels, an e-sport complex and other cultural facilities will help energize the region, Oh explained.

Skyscrapers taller than Lotte World Tower can also be built in the Yongsan area. The Seoul city government currently plans to allow a floor-area ratio of 1,500 percent or beyond -- the maximum ratio under the current law.

The city has also pledged to take up afforestation with 50 percent of the land. The city government said the area would also have a large-sized park, which will connect Yongsan Station and Han River with pedestrian paths.

Roads and other transportation infrastructure will be constructed on the underground floors. The area will become the city’s first mobility hub, which will include a subway and GTX rail lines, short for the Great Train eXpress. Oh said the accessibility to other areas of Seoul, the greater Seoul area and Incheon Airport will increase.

The city also plans to establish an urban air mobility system, the next-generation transportation system that connects travelers to air transport. The city government plans to test drive UAM vehicles between the Yongsan region and Gimpo International Airport in 2025 and later expand the UAM lines to other parts of Seoul and Incheon Airport.

A total of 6,000 housing units will also be created in the area, according to the Seoul city government‘s development plan.