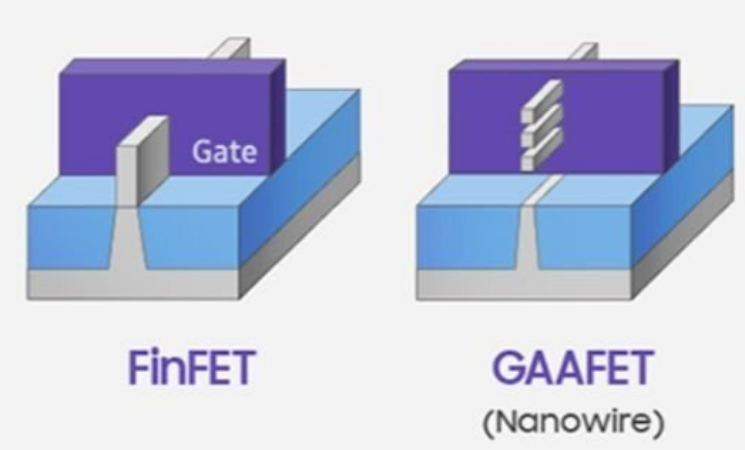 A 3-nano gate-all-around (GAA) process is expected to become a game changer in the foundry industry. Samsung Electronics is planning to catch up with Taiwan’s TSMC, the No. 1 foundry company in the world, by establishing a 3-nano GAA process within the next three years.

GAA is a next-generation process technology that improves the structure of a semiconductor transistor so that a gate can contact the all four sides of a transistor, versus the three sides in the case of the current FinFET process. The GAA structure can control the electricity current more precisely than the FinFET process.

According to TrendForce, Taiwan’s TSMC accounted for 52.1 percent of the global foundry market in the fourth quarter of 2021, far ahead of Samsung Electronics' 18.3 percent.

Samsung Electronics is betting on the application of GAA technology to the 3-nm process to catch up with TSMC. The Korean semiconductor giant reportedly put wafers in a 3-nm GAA process for pilot mass production in early June, becoming the first company in the world to use GAA technology. It is looking to narrow its gap with TSMC at once through a technological quantum leap. A 3-nm process boosts semiconductors’ performance and battery efficiency by 15 percent and 30 percent, respectively, while reducing chip areas by 35 percent compared to a 5-nm process.

Following the application of GAA technology to its 3-nm process in the first half of this year, Samsung plans to introduce it to second-generation 3-nm chips in 2023 and mass produce GAA-based 2-nm chips in 2025. TSMC’s strategy is to enter the 3-nm semiconductor market in the second half of this year using a stable FinFET process, while Samsung Electronics is betting on GAA technology.

If Samsung secures a stable yield in the GAA-based 3-nm process, it can become a game changer in the foundry market, experts say. TSMC is expected to introduce a GAA process beginning from 2-nm chips and release the first product around 2026. For Samsung Electronics, the next three years will be a pivotal period.

Recently, Samsung announced that it would invest a total of 450 trillion won in key industries such as semiconductors over the next five years. However, it is faced with 3-nm barriers. Like Samsung, TSMC also has difficulties in raising the yield in 3-nm processes.

TSMC originally planned to mass-produce semiconductors for Intel and Apple with 3-nano technology beginning from July, but is having difficulties in securing a desired yield. NVIDIA paid TSMC up to US$9 billion in advance for production of the GeForce RTX40 GPU series, to be released within this year, using a 3-nm process, but will receive 5-nm products instead of 3-nm products. Taiwan’s DigiTimes reported that TSMC had difficulties in securing a desired yield on the 3-nm process and has consequently revised its technology roadmap several times.

A similar situation is facing Samsung Electronics. Wafers were put in for pilot mass production in the 3-nm process, but the company has been putting off its official mass-production announcement due to a low yield problem. Roh Keun-chang, head of research at Hyundai Motor Securities, said, “Unless Samsung Electronics secures enough customers for its 7-nm or more advanced processes, it may fuel anxiety among investors about Samsung Electronics’ future performance."