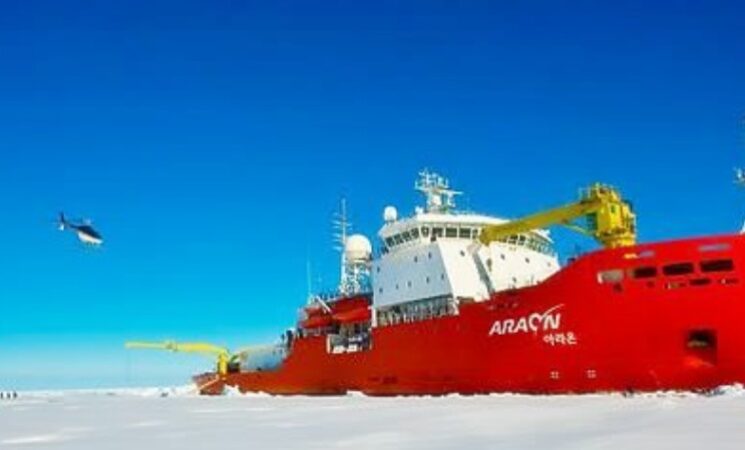 South Korea's icebreaker is on its way to the southeastern port of Busan after completing a 195-day international exploration mission in the Antarctic Ocean, the oceans ministry said Monday.

The Araon, South Korea's first ice breaking vessel, kicked off its mission to the South Pole on Oct. 20 last year and will return to Busan on Tuesday, the Ministry of Oceans and Fisheries said.

The 7,487-ton research ship explored the sea under the Thwaites Eastern Ice Shelf, one of the biggest ice shelves in West Antarctica, with helicopters and devices attached to seals as part of global efforts to examine the cause of global warming and study the Antarctic ecosystem.

Few explorations of West Antarctica have been made so far due to difficulty of access as the melting of the Thwaites Eastern Ice Shelf has been accelerating, the ministry said.

An ice shelf is a huge floating platform of ice that forms where a glacier or ice sheet flows down to a coastline and onto the ocean surface.

The Araon also examined the ecology of penguins and seals, two upper predators in the Antarctic marine ecosystem, and collected sea water from West Antarctica to analyze the Antarctic Ocean's ability to store carbon.

The ministry said the research vessel had also conducted an on-spot exploration of January's Hunga Tonga-Hunga Ha'apai submarine volcanic eruption, the first such examination in the world, in an effort to collect raw data that could be used to shed light on the eruption of a volcano.

After making a port call in Busan, the Araon will move to the southwestern port of Gwangyang for repair and maintenance and embark on a voyage to the North Pole in July this year, according to the ministry.