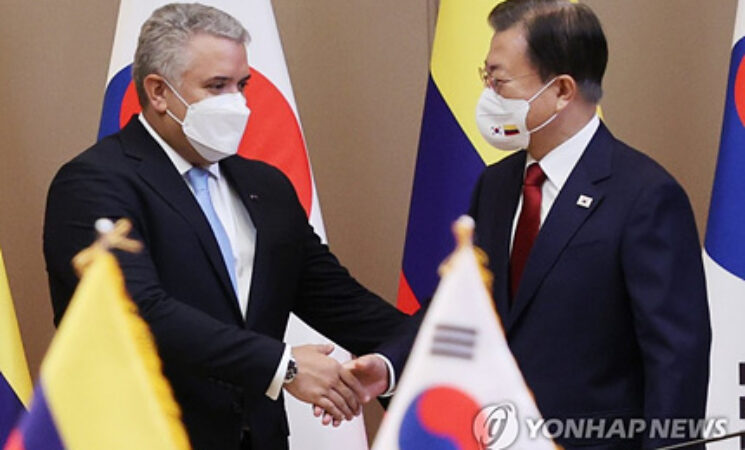 The leaders of South Korea and Colombia agreed during their talks here Wednesday to strengthen cooperation between the two countries especially in the digital, environmental and cultural fields.

The summit between President Moon Jae-in and his Colombian counterpart Ivan Duque came as the two sides commemorate the 10th anniversary of forging a "strategic partnership."

As the only Latin American country to have dispatched troops to help South Korea during the 1950-53 Korean War, Colombia is a traditional ally that shares the values of democracy and peace, according to Moon's office.

Moon and Duque agreed to develop the "comprehensive and forward-looking cooperative" relationship, it said.

Moon proposed the two sides, which are pushing proactively for digital transformation and eco-friendly growth policies for the post-coronavirus era, promote partnerships for economic recovery.

He requested Duque's interest and support for South Korean firms seeking to participate in the Colombian government's digital and eco-friendly infrastructure projects.

In addition, they agreed to expand exchanges and cooperation in the digital-based education and cultural sectors such as movies, music and taekwondo.

Meanwhile, Moon awarded the Grand Order of Mugunghwa, South Korea's highest medal of honor, to the Colombian president. Duque bestowed Colombia's Order of Boyaca on Moon. They exchanged the medals in recognition of contributions to each other's national development and security.