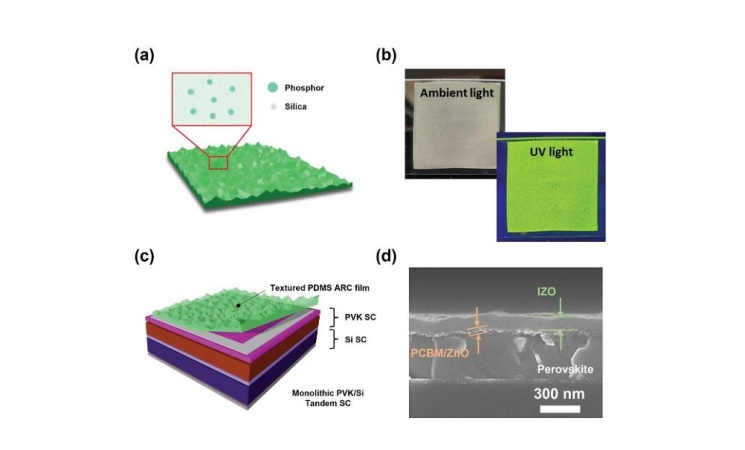 To maximize the efficiency of next-generation tandem solar cells, a joint team of researchers has developed a versatile non-glare film that would cut off ultraviolet light while maximizing the absorption of visible light to increase the efficiency of solar power plants.

Because the tandem solar cell captures light through a two-way system, it is much more efficient than conventional single-layer solar cells. However, the efficiency of cell stacks is the main obstacle to commercialization. A large portion of the light is reflected from the smooth surface of cells, lowering the efficiency. Strong ultraviolet light also damages cells to reduce their lifespan.

The Ulsan National Institute of Science and Technology (UNIST) said that its research team collaborated with a team from the University of Pittsburgh to develop a textured anti-reflective coating (ARC) polymeric film with improved light absorption properties. The film containing silicon nanoparticles and phosphors can increase the lifespan of cells while maximizing the absorption of visible light.

Through tests, researchers found that a tandem cell with the ARC polymeric film maintained up to 91 percent energy conversion efficiency for more than 120 hours while the efficiency of a cell with conventional anti-glare films was lowered to some 50 percent after 20 hours of operation.

"This technology can cut off ultraviolet rays. So it can be used for the commercialization of tandem cells and for the development of organic solar cells and organic diodes that are weak against ultraviolet light," UNIST said in a statement on July 17.