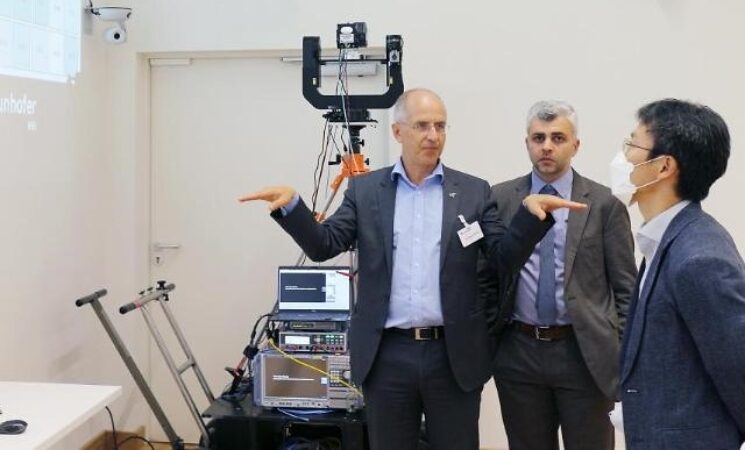 LG Electronics claimed to have successfully tested the wireless transmission and reception of 6G terahertz (THz) data at a frequency range of 155 to 175 gigahertz (GHz) over a distance of 320 meters outdoors, taking a step closer to realizing 6G speeds of one terabit per second (Tbps) in both indoor and outdoor urban areas

Tbps is a unit used to measure data transfer rates for digital information or computer storage and is based on "Decimal multiples of bits." GHz is a frequency unit that measures the number of cycles per second. THz is a unit of frequency defined as one trillion cycles per second. The 6G THz frequency band includes an enormous amount of available spectrums.

LG Electronics said that the milestone, achieved on September 7 at the Fraunhofer Heinrich-Hertz Institute (HHI) in Berlin, Germany, represents a significant step toward commercializing 6G THz in both indoor and outdoor urban areas because the reference cell coverage of base stations for urban macro cells is a distance of about 250 meters outdoors. 6G has a shorter transmission distance than 5G. Base stations should be built more closely than 5G to eliminate shaded areas.

In August 2021, LG Electronics proved it could transfer 6G THz data over a distance of 100m outdoors. The company has worked with Fraunhofer HHI, and the Fraunhofer Institute for Applied Solid State Physics (IAF) to develop a power amplifier capable of increasing transmission strength, and a receiver low-noise amplifier that minimizes noise generation for reception signal and improves incoming signal quality.

LG  Electronics said that the multi-channel power amplifier used in September had an increased output of more than 20-decibel milliwatts (dBmW). dBm is a unit of level used to indicate that a power level is expressed in decibels with reference to one milliwatt. It is used in radio, microwave and fiber-optical communication networks as a convenient measure of absolute power because of its capability to express both very large and very small values in a short form.

LG Electronics said that new technologies were integrated into its latest module design, which has been highly capable of future integrated circuit fabrication to help ease the path towards future commercialization. "With the success of our latest demonstration, we are one step closer to realizing 6G speeds of one Tbps in both indoor and outdoor urban areas," LG Electronics chief technology officer Kim Byoung-hoon said in a statement on September 14.

LG Electronics has teamed up with the state-run Korea Advanced Institute of Science & Technology (KAIST) and Keysight Technologies, an American manufacturer of electronics test and measurement equipment and software, to develop THz technologies, establish a test infrastructure, upgrade measuring equipment, and study the environment of radio waves. Keysight has provided design and test tools.

As a frontrunner in disseminating 5G mobile services, South Korea aims to achieve the world's first commercialization of 6G mobile telecommunication in 2028 through the development of THz-related source technologies. A 6G network can be commercialized only when a high-performance network on the ground and satellite communication are combined.