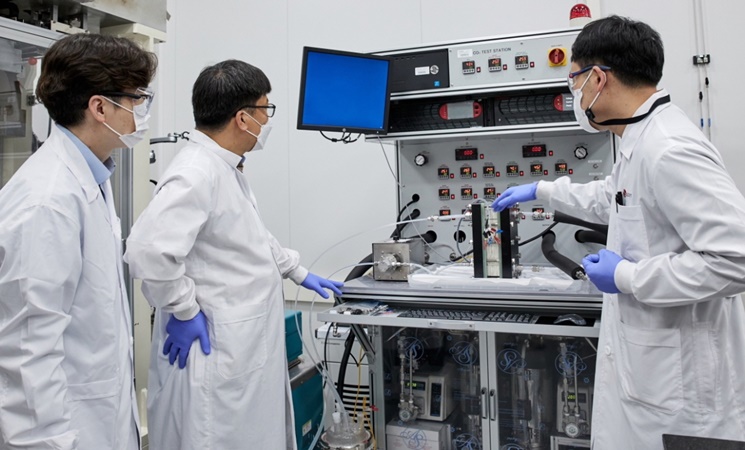 LG Chem and the Korea Institute of Science and Technology (KIST) have developed a technology that efficiently turns carbon dioxide into carbon monoxide, which is used to produce alternative fuels and plastic.

The two parties have developed an electrochemical reactor for converting carbon dioxide into carbon monoxide at the highest level of efficiency through joint research, the company said.

Carbon monoxide is needed to produce alternative fuel sources such as synthesis gas and methanol, as well as various chemical materials including plastic.

The electrochemical conversion technology uses electricity to convert carbon dioxide into high value-added carbon compounds such as carbon monoxide, helping reduce greenhouse gas and making use of the ample carbon dioxide in the air to achieve carbon neutrality.

By controlling the ratio of carbon monoxide and hydrogen through voltage adjustment, the reactor developed by LG Chem and KIST can also produce synthesis gas, which is used to make various fuels and chemical compounds.

The efficiency of the electric current used to break down carbon dioxide and deoxidize is more than 90 percent, the highest reported so far.

By applying a stack method, developers can build an electrochemical reactor of an optimal size to seek commercialization, the company said.

LG Chem and KIST plan to increase the size of the reactor more than tenfold to secure technology for mass production.

They also plan to develop a technology to collect carbon dioxide from the air to produce ethylene, which is used to make various petrochemical products.