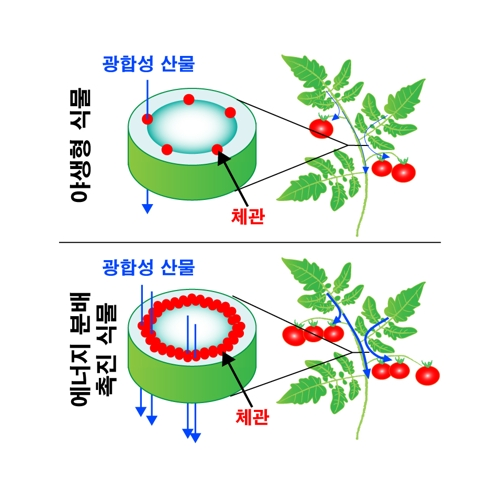 The National Research Foundation of Korea announced on June 4 that a research team led by professor Hwang Il-doo, professor Cho Hyun-woo and doctoral student Cho Hyun-seop of POSTECH has succeeded in identifying the process of controlling the development of sieve tubes inside plants for the first time.

A sieve tube is a connection path inside a plant. Sugar, which is energy produced through photosynthesis, is distributed to stems, roots, young leaves, and so on through sieve tubes.

The research team found specific protein involved in tubal development in vascular plants such as thale-cresses and tobaccos.

This protein was named “julgi” in Korean, which means “stem” in English.

The research team also developed plants with increased sieve tubes by controlling “julgi” protein in stems, which increased productivity such as seed size and weight by up to 40 percent.

They also found out the specific process of julgi protein controlling the development of sieve tubes.

The research team believes that the stem protein and its control of the growth of sieve tubes of target genes played a crucial role in the evolution of vascular plants, which make up the majority of the earth's vegetation.

"This study has proved a connection between an energy transfer (distribution) capability and productivity in a plant that has thus far been proposed only theoretically," professor Hwang said. "This study is expected to play an important role in solving the problems of food shortage and a drop in plant productivity due to climate change."

The research was carried out with support from the Ministry of Science and ICT, the Basic Research Project of the National Research Foundation of Korea and the Rural Development Administration's Woo Jang-chun project.

The paper on the achievements of the study was published in the Nature Plants, the most authoritative academic journal on plants, on May 28. The June issue carried it as a cover paper.