Korea to have more EV charging, self-driving robots at parks 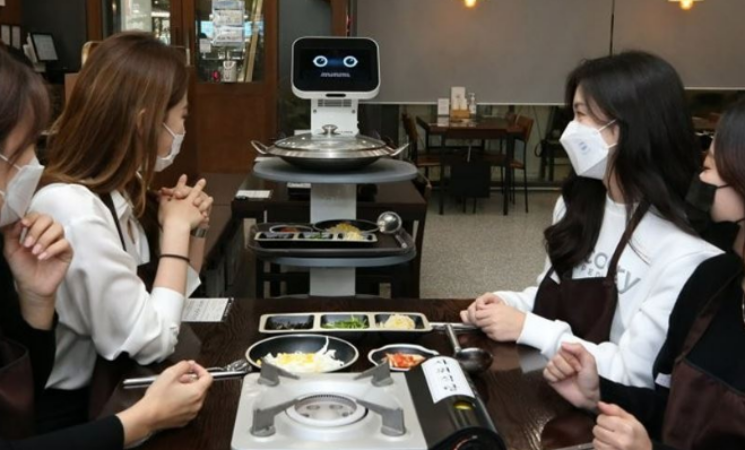 More and more gas stations are expected to operate charging ports for electric vehicles under state measures to promote supply of eco-friendly vehicles by easing regulations.

In addition, businesses will be allowed to operate autonomous mobile robots at parks, while the current rules restrict the range of serving robots to indoor restaurants, government officials said Monday.

A task force on deregulations, led by the Ministry of Economy and Finance, unveiled the second phase of deregulatory targets (36 items), following the first targets (50 items) that were announced on July 28.

A noteworthy target is gas stations, whose regulations are mostly set for the safety of internal combustion engine-powered vehicles such as gasoline and diesel. This has physically blocked a large portion of gas stations from establishing EV charging ports.

With the overhaul of the rules, gas stations will be allowed to set up EV ports as long as the facilities are equipped with safety measures.

Policymakers said the action will expand convenience for EV owners and vitalize the EV and charging facility industries.

In addition, individuals will be allowed to lend their own EV charging ports to sharing platform-oriented businesses, as long as the individuals have a license for their charging business.

This will also have the effect of increasing the number of charging ports across the nation.

The government has also decided to allow EV charging ports to sell electricity, which is produced via facilities for renewable energy generation including solar power generation.

Rules on autonomous mobile robots will also be eased. Businesses will be allowed to operate serving and cleaning robots at parks. But the task force specified that the robot’s weight should be less than 60 kilograms in consideration of public safety.

On a mid- and long-term basis, the government is seeking to expand the operation of autonomous mobile robots to the overall segment in urban areas.

For commercialization of drone businesses, policymakers will increase the number of specially designated drone zones, while only 33 zones are in operation nationwide.

The special zones enjoy streamlines or exemptions from six major regulations such as flight approval and safety certification.

Among other deregulatory rules the 36 items are related to are sectors like construction, environment and medical health services.

“Via these deregulations for 36 industrial items, corporate investments worth 800 billion won ($582 million) will be conducted promptly and smoothly,” said Deputy Prime Minister and Finance Minister Choo Kyung-ho while presiding over the task force meeting on the day.

He reiterated that the deregulations are aimed at reinvigorating the economy.