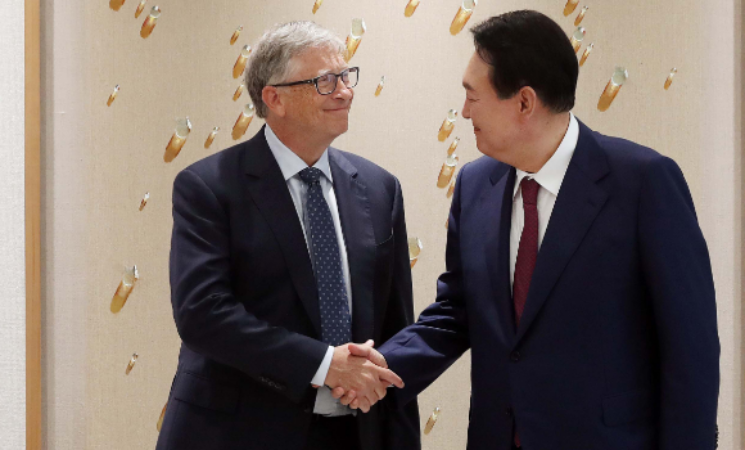 Bill Gates on Tuesday(16 Aug) said he hoped South Korea would take on a larger role in tackling global health threats to match the scale of its economy in a stronger partnership with the Bill and Melinda Gates Foundation, which he co-chairs.

In a meeting with President Yoon Suk-yeol at his office in central Seoul, Gates said that South Korea‘s growing contribution to global health and its capabilities made the country “a strong match” with the goals of the Gates Foundation.

“The Gates Foundation is very lucky to get to work with almost all of the rich countries in the effort to improve global health. ... Korea has been a good partner, and we hope we can do more together,” he said.

Yoon said Gates has been a “driving force” in equitable distribution of vaccines and therapeutics over the pandemic and that his contributions “have been huge in achieving health justice.”

“SK Bioscience of South Korea succeeded in coming up with a COVID-19 vaccine in June. I hope that the vaccine would be of great use in stopping the disease in countries that need it,” he said. “I also thank Mr. Gates for his support in the development of this vaccine.”

The president said that through a partnership with his foundation South Korea would “continue to make advancements in biotechnology and health industries that serve the health of the global community.”

Earlier the same day, Gates said in an address to the National Assembly that Korea is “poised to be a leader” in advancing global health security.

“Over the last 70 years, with a little bit of help from foreign aid donors and incredible hard work and creativity, you transformed your postwar economy into a powerhouse in a very short time,” he said. “Now Korea gives aid to help dozens of countries to start the same journey of progress.”

He said that as South Korea increases that generosity “to match (its) economic success -- the 10th-largest economy -- (the country) will be able to have an incredible impact.”

The past experience with COVID-19 highlighted the interconnected nature of public health emergencies, he said. “A single infection anywhere in the world without the right capabilities can spread to the entire world.”

In the face of the pandemic, multilateral health initiatives have been “by far the most impactful,” he said, two of the most important among them being the Coalition for Epidemic Preparedness Innovations or CEPI, and Gavi, the vaccine alliance.

“CEPI helped develop the COVID-19 vaccines that have allowed the pandemic to come under control,” he said. The group was also working with South Korean companies to come up with new tools such as a “vaccine that will cover all coronaviruses.”

Over the last two years, Gavi “delivered over a billion COVID-19 vaccines,” he said, saving “tens of millions of lives” for “very, very little money.”

“This is a crisis moment for global health. This is also a fantastic time for our foundation to strengthen the partnership here with Korea, providing great ideas for new tools and more resources to help those most in need,” he said.

He went on, “We can continue to radically improve global health and eradicate diseases like polio, measles and malaria and improve the lives of all humans. It’s the right thing to and the smart thing to do, and I look forward to doing it in partnership (with South Korea).”

National Assembly Speaker Kim Jin-pyo, in an address delivered at the same event, said efforts by Gates and his foundation have “enabled the vaccines to become available in less than a year since COVID-19 emerged.”

“Without these vaccines, we likely would have suffered a lot more deaths globally than we already had,” he said.

The parliament speaker then thanked Gates for supporting the development of a South Korean COVID-19 vaccine with a grant from his foundation and the foundation-backed CEPI.

Kim said South Korea has worked with Gates for a shared goal of global health security over the years.

The South Korean government and the Gates Foundation jointly established the Research Investment for Global Health Technology Fund in 2018, with the aim of assisting the development of essential global health technologies, he said.

Prior to the joint address, Kim spoke with Gates for about 40 minutes in a closed-door meeting on public health partnerships, among other things.

Also present at the meeting were Lee Kwang-jae, secretary-general of the parliament, Reps. Kwon Seong-dong and Park Hong-keun, floor leaders of the ruling and main opposition parties, and members of the parliamentary committees for health and budget.

According to Kim’s office, the speaker was the first to extend an invitation to Gates to the National Assembly via a June visit by Trevor Mundel, president of global health at the Gates Foundation.

He also invited Gates to the World Bio Summit, hosted by South Korea together with the World Health Organization, slated for October and to the Global Health Security Agenda ministerial meeting taking place in November.