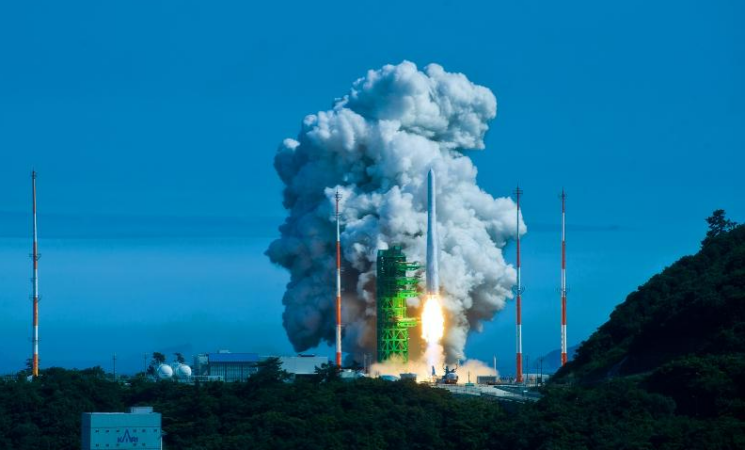 The domestically developed space rocket KSLV-II, aka Nuri, has seen a successful launch.

The historic launch on June 21 came 12 years and three months after development of Nuri began in 2010, 30 years after the 1992 launch of Korea's first satellite Uribyeol 1 (KITSAT-1) and 20 years after the 2002 launch of the KSR-Ⅲ, the first Korean rocket using liquid propellant as fuel.

Korea is now the seventh country to independently launch a mid- to large-size satellite of over a ton or more into space, following Russia, the European Union, China, Japan and India.

The Ministry of Science and ICT and Korea Aerospace Research Institute (KARI) on June 21 said Nuri, whose liftoff came at 4 p.m. that day at the Naro Space Center in Goheung-gun County, Jeollanam-do Province, entered its target orbit of 700 km, after which the test satellite to verify the rocket's performance separated and entered orbit.

The dummy and test satellites are orbiting Earth at a speed of 7.5 km per second at an altitude of around 700 km.

The Nuri mega-project has cost KRW 1.95 trillion. Everything was produced by domestic researchers, from the 75 ton-liquid fuel engine propelling the satellite to the fairing serving as the protective covering for the satellite loaded in the projectile.

Minister of Science and ICT Lee Jong-Ho told a news conference at the space center, "This launch is historically significant as Korea is now the world's seventh country to possess the technology to launch a projectile into space," adding, "Our country has provided a foothold for us to go into space whenever we want without borrowing another country's launch site or projectile."

"Based on its experience and technology gained from developing Nuri, the government will further improve Korea's satellite launch capability by promoting the development of a space launch vehicle with improved performance."

President Yoon Suk Yeol, who watched Nuri's launch from his office in Seoul's Yongsan-gu District, said, "A path to space has now been paved from our territory in the Republic of Korea," adding, "This is the result of 30 years of difficult challenges."