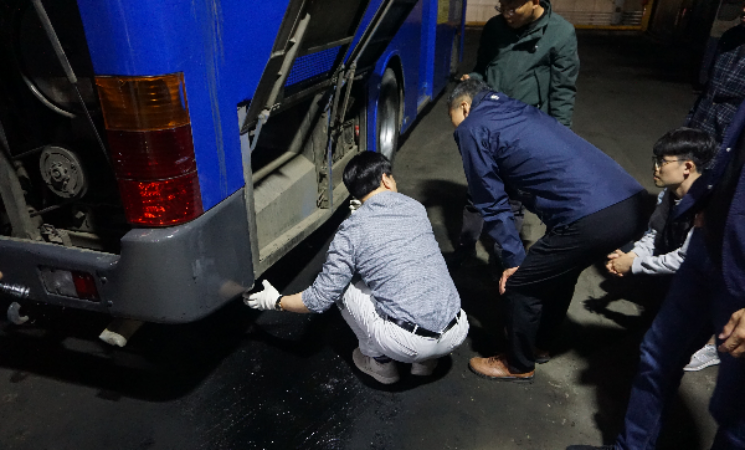 The Korea Institute of Machinery and Materials (KIMM) announced on June 10 that a KIMM research team discussed cooperative efforts with the Ulaanbaatar City’s public transportation authorities and Mongolian University of Science and Technology to apply KIMM's particulate matter reduction technology to old buses in Ulaanbaatar to achieve sustainable city development.

KIMM has been conducting a technology development project led by Dr. Lee Dae-hoon, head of the Dept. of Plasma Engineering, to reduce automobile exhaust emissions in Ulaanbaatar since last year.

In 2019, Mongolia officially requested the Korean government to provide support to reduce particulate matter emission from the vehicles in Ulaanbaatar. Fine dust pollution in Mongolia is very serious due to the widespread use of low-grade heating fuel; a lack of emission reduction technologies in power plants and factories; and a large number of old vehicles still in use. Furthermore, it is difficult to apply existing diesel particulate filter (DPF) technologies in Mongolian vehicles due to the high sulfur concentrations in fuel sources and low atmospheric temperatures in the winter.

KIMM has developed the world's first plasma burner-based diesel particulate filter (DPF) technology, which captures particulate matter generated during the combustion process of diesel engine before burning and removes it. A temperature of at least 550°C is required for this removal process. As such, when the temperature of exhaust gas is not high enough during low-speed driving in downtown areas or during the winter, a diesel oxidation catalyst (DOC), fuel after-injection from the engine, or separate burners are installed to raise the temperature accordingly.

Specifically, construction machinery and other special vehicles show very low exhaust gas temperatures. As a result, when applying conventional burner technologies, it was difficult to apply the DPF itself because of ignition failure or unstable flame resulting in the generation of white smoke. To address these issues, KIMM has developed a DPF system that can be operated stably, even in special vehicles, through innovations using plasma burner technology, which improved the ignition and flame stability of the burner.

This technology has been applied to special military vehicles since 2018, and field tests have demonstrated its capacity to alleviate the inconvenience experienced by soldiers due to excessive particulate matter emission. Since 2021, field tests of this technology have been applied to construction machines such as mixers and dump trucks, once again confirming significant reductions in the generation of white smoke. The field tests in Mongolia will be the first of their kind to be conducted overseas.

The KIMM research team signed on June 8 a memorandum of understanding with the Mongolian University of Science and Technology (MUST), a partner institution in this project. Through this agreement, the two parties agreed to continue their cooperative research efforts for successful application of plasma DPF technology in Ulaanbaatar, Mongolia.

KIMM president Park Sang-jin stated that the large-scale application of KIMM’s customized emission reduction technology in Mongolia will enhance South Korea’s status as a technologically advanced country and contribute to supporting the expansion of domestic companies overseas. He also added that, moving forward, KIMM hopes to contribute to the improvement of global issues regarding particulate matter pollution by further supplying advanced technologies to other countries with relatively poor fuel quality and vehicle conditions.