Jeju Island to launch drone taxi routes for tourists by 2025 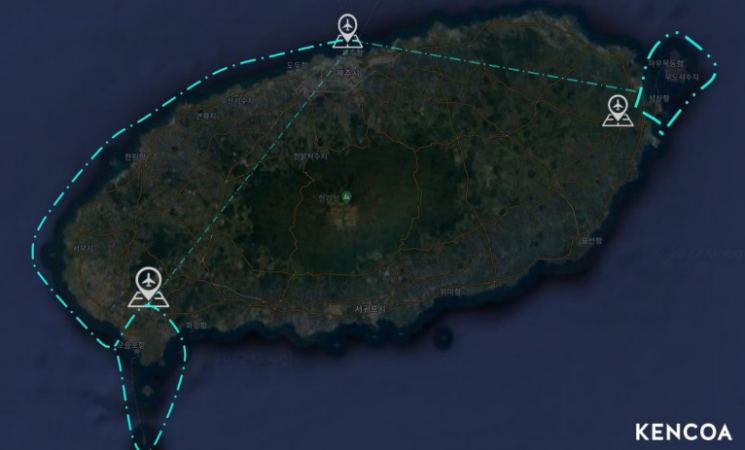 The first route connects Jeju International Airport to the island’s southern Mosupo area, which then links Moseulpo to further down to Gapado and Marado. The third route moves along the east coast near Seongsan Ilchulbong, a popular site also known as Sunrise Peak.

“This would allow tourists to hop on the electric vertical take-off and landing (eVTOL) aircraft at Jeju airport to directly land at tour spots and transfer to drone taxis nearby. The time frame would be around 2025,” said Kencoa Aerospace Executive Chung Chan-young.

Jeju Special Self-Governing Province also plans to set up a Vertiport –- a helipad-like area that can be on land, water or a structure on which eVTOLs can take off and land -- at large-scale hotels where many visitors stay.

Jeju’s idea of deploying UAM as tourist transportation is highly feasible and can happen early, Chung said, citing Seoul City’s plan to “test” a UAM route that connects Gimpo International Airport to central Yongsan-gu, Seoul. The plan, however, has hit a snag as the presidential office was relocated to Yongsan-gu in May.

“Flying a UAM aircraft through the coast in the island faces less troubles compared to running an air taxi in Seoul, where flying drones or aircrafts in areas like Yongsan is heavily restricted by government regulations,” said Chung.

According to the Transport Ministry, major districts in Seoul and the entire airspace along the Han River are no-fly zones.

“Jeju works as a perfect test bed and the best location to leverage UAM for the area’s advantages. Examining geographical features through the coastline is less complicated, and establishing a Vertiport on the sea can also work,” Chung added.

Meanwhile, the Transport Ministry has submitted its draft of a bill that would set up requirements and regulations for UAM, The Korea Herald learned through interviews. It is the first of its kind in the world, according to sources. If approved by the National Assembly, South Korea would become the first country to have regulations dedicated to UAM, the sources added.

The special law is expected to separate UAM from the legal boundary of the current aviation law. Flying cars would be advised not to fly within the altitude of helicopters, which is at around 450 meters above ground. The rule for UAM could range between 300 to 600 meters above land.

Under the government’s plan to commercialize UAM in central cities by 2025, the Transport Ministry kicked off a K-UAM Grand Challenge in February to coordinate all of South Korea’s UAM-related activities as part of its focus to enable emerging aviation markets.

Major firms like SK Telecom, Hyundai Motor Group and Hanwha Systems have formed consortiums to participate in the government-led evaluation and demonstration test, which will take place in Goheung, South Jeolla Province from next year.