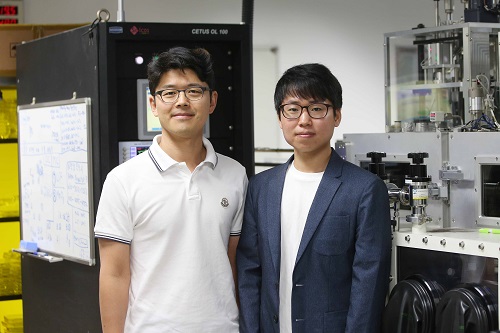 Recently, the power conversion efficiency (PCE) of colloidal quantum dot (CQD)-based solar cells has been enhanced, paving the way for their commercialization in various fields; nevertheless, they are still a long way from being commercialized due to their efficiency not matching their stability. In this research, a KAIST team achieved highly stable and efficient CQD-based solar cells by using an amorphous organic layer to block oxygen and water permeation.
CQD-based solar cells are light-weight, flexible, and they boost light harvesting by absorbing near-infrared lights. Especially, they draw special attention for their optical properties controlled efficiently by changing the quantum dot sizes. However, they are still incompatible with existing solar cells in terms of efficiency, stability, and cost. Therefore, there is great demand for a novel technology that can simultaneously improve both PCE and stability while using an inexpensive electrode material.
Responding to this demand, Professor Jung-Yong Lee from the Graduate School of Energy, Environment, Water and Sustainability and his team introduced a technology to improve the efficiency and stability of CQD-based solar cells.
The team found that an amorphous organic thin film has a strong resistance to oxygen and water. Using these properties, they employed this doped organic layer as a top-hole selective layer (HSL) for the PbS CQD solar cells, and confirmed that the hydro/oxo-phobic properties of the layer efficiently protected the PbS layer. According to the molecular dynamics simulations, the layer significantly postponed the oxygen and water permeation into the PbS layer. Moreover, the efficient injection of the holes in the layer reduced interfacial resistance and improved performance.
With this technology, the team finally developed CQD-based solar cells with excellent stability. The PCE of their device stood at 11.7% and maintained over 90% of its initial performance when stored for one year under ambient conditions.
Professor Lee said, “This technology can be also applied to QD LEDs and Perovskite devices. I hope this technology can hasten the commercialization of CQD-based solar cells.”
This research, led by Dr. Se-Woong Baek and a Ph.D. student, Sang-Hoon Lee, was published in Energy & Environmental Science on May 10.
Figure 1. The schematic of the equilibrated structure of the amorphous organic film 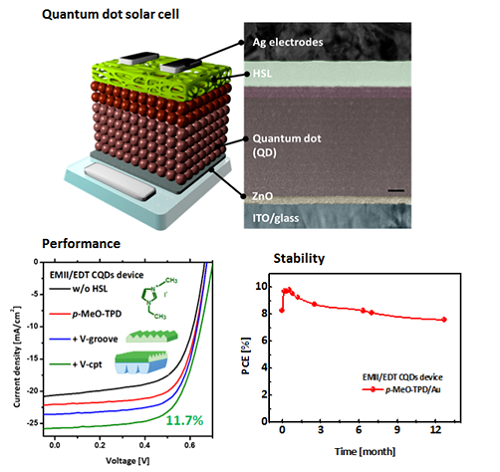