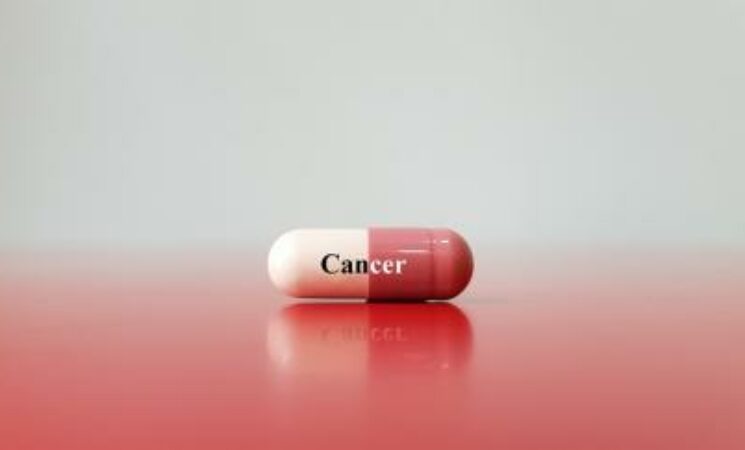 The chemotherapy drug decitabine is commonly used to treat patients with blood cancers, but its response rate is somewhat low. Researchers have now identified why this is the case, opening the door to more personalized cancer therapies for those with these types of cancers, and perhaps further afield.

Researchers have identified the genetic and molecular mechanisms within cells that make the chemotherapy drug decitabine—used to treat patients with myelodysplastic syndrome (MDS) and acute myeloid leukemia (AML) —work for some patients but not others. The findings should assist clinicians in developing more patient-specific treatment strategies.

The findings were published in the Proceedings of the National Academies of Science on March 30.

The chemotherapy drug decitabine, also known by its brand name Dacogen, works by modifying our DNA that in turn switches on genes that stop the cancer cells from growing and replicating. However, decitabine’s response rate is somewhat low (showing improvement in just 30-35% of patients), which leaves something of a mystery as to why it works well for some patients but not for others. To find out why this happens, researchers from the KAIST investigated the molecular mediators that are involved with regulating the effects of the drug.

Decitabine works to activate the production of endogenous retroviruses (ERVs), which in turn induces an immune response. ERVs are viruses that long ago inserted dormant copies of themselves into the human genome. Decitabine in essence, ‘reactivates’ these viral elements and produces double-stranded RNAs (dsRNAs) that the immune system views as a foreign body.

“However, the mechanisms involved in this process, in particular how production and transport of these ERV dsRNAs were regulated within the cell were understudied,” said corresponding author Yoosik Kim, professor in the Department of Chemical and Biomolecular Engineering at KAIST.

“So to explain why decitabine works in some patients but not others, we investigated what these molecular mechanisms were,” added Kim.

To do so, the researchers used image-based RNA interference (RNAi) screening. This is a relatively new technique in which specific sequences within a genome are knocked out of action or “downregulated.” Large-scale screening, which can be performed in cultured cells or within live organisms, works to investigate the function of different genes. The KAIST researchers collaborated with the Institut Pasteur Korea to analyze the effect of downregulating genes that recognize ERV dsRNAs and could be involved in the cellular response to decitabine. 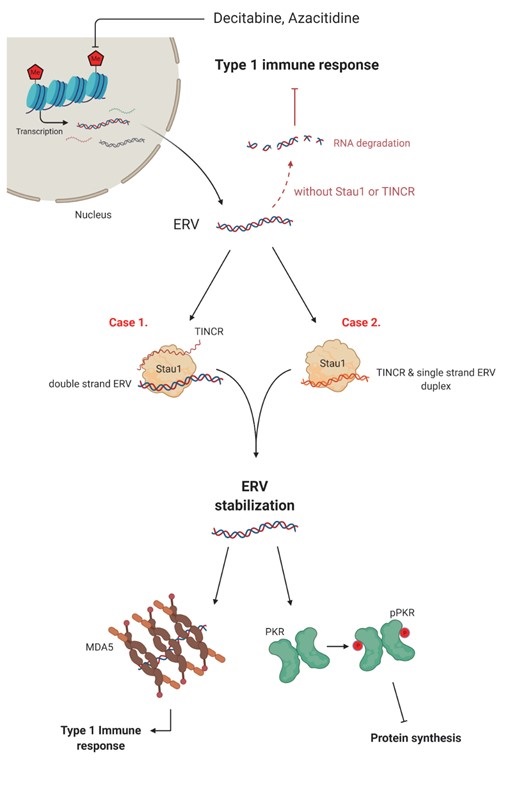 < Schematic diagram of the molecular mechanism of decitabine. Differences in immune responses in the body according to the expression of Staufen1 and TINCR. >

From these initial screening results, they performed an even more detailed downregulation screening analysis. Through the screening, they were able to identify two particular gene sequences involved in the production of an RNA-binding protein called Staufen1 and the production of a strand of RNA that does not in turn produce any proteins called TINCR that play a key regulatory role in response to the drug. Staufen1 binds directly to dsRNAs and stabilizes them in concert with the TINCR.

If a patient is not producing sufficient Staufen1 and TINCR, then the dsRNA viral mimics quickly degrade before the immune system can spot them. And, crucially for cancer therapy, this means that patients with lower expression (activation) of these sequences will show inferior response to decitabine. Indeed, the researchers confirmed that MDS/AML patients with low Staufen1 and TINCR expression did not benefit from decitabine therapy.

“We can now isolate patients who will not benefit from the therapy and direct them to a different type of therapy,” said first author Yongsuk Ku. “This serves as an important step toward developing a patient-specific treatment cancer strategy.”

As the researchers used patient samples taken from bone marrow, the next step will be to try to develop a testing method that can identify the problem from just blood samples, which are much easier to acquire from patients.

The team plans to investigate if the analysis can be extended to patients with solid tumors in addition to those with blood cancers.