Feel the Force with ElaStick​ 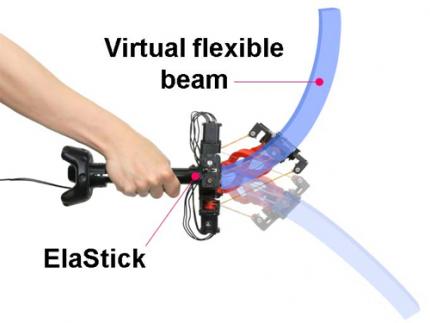 Haptic controllers play an important role in providing rich and immersive virtual reality experiences. Professor Andrea Bianchi’s team in the Department of Industrial Design recreated the haptic response of flexible objects made of different materials and with different shapes by changing the stiffness of a custom-controller – ElaStick.

ElaStick is a portable hand-held force-feedback controller that is capable of rendering the illusion of how flexible and deformable objects feel when held in the hand. This VR haptic controller can change its stiffness in two directions independently and continuously. Since providing haptic feedback enhances the VR experience, researchers have suggested numerous approaches for rendering the physical properties of virtual objects - such as weights, the movement of mass, impacts, and damped oscillations.

The research team designed a new mechanism based on a quaternion joint and four variable-stiffness tendons. The quaternion joint is a two-DoF bending joint that enables ElaStick to bend and oscillate in any direction using a pair of tendons with varying stiffness. In fact, each tendon around the joint is made of a series of elastic rubber bands and inelastic fishing lines and can vary its stiffness by changing the proportion of the two materials. Thanks to these structures, each pair of tendons can behave independently, controlling the anisotropic characteristics of the entire device.

“The main challenge was to implement the mechanism to control the stiffness while maintaining independence between deformations in two perpendicular directions,” said Professor Bianchi.

The research team successfully measured the relative threshold of human perception on the stiffness of a handheld object. The results showed that the just-noticeable difference (JND) of human perception of stiffness is at most about 30% of the change from the initial value. It also found that appropriate haptic responses significantly enhance the quality of the VR experience. The research team surveyed the perceived realism, immersion, and enjoyment of participants after they played with various flexible objects in VR.

“It is meaningful that the haptic feedback of a flexible object was mechanically reproduced and its effectiveness in VR was proven. ElaStick has succeeded in implementing a novel mechanism to recreate the dynamic response of flexible objects that mimic real ones, suggesting a new category of haptic feedback that can be provided in VR,” explained Professor Bianchi.

The team plans to extend the ElaStick’s applications, from being used merely as a game controller to driving simulations, medical training, and many other digital contexts. This research, led by MS candidate Neung Ryu, won the Best Paper Award at the ACM UIST 2020 (the ACM Symposium on User Interface Software & Technology) last month.