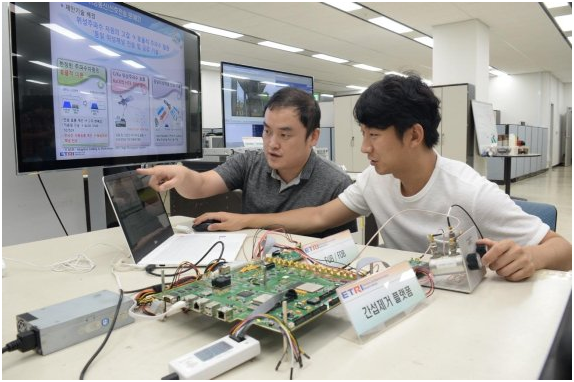 Researchers at the Electronics and Telecommunications Research Institute (ETRI) demonstrate the frequency interference clearing technology that they have developed.

A Korean research team developed a technology that increases the efficiency of satellite communication frequency while bringing the cost down to half.

On August 14, the Electronics and Telecommunications Research Institute (ETRI) disclosed that it has developed a “frequency interference clearing technology,” which detects signals it wants from the interfering signals made from a superposition of the frequency bands that the satellite sends out and receives.

The team succeeded in selectively extracting the terminal signal even when the base station and the terminal use the same frequency and the signals overlap. The team has made it possible to extract the signal transmitted through the terminal by separating the previously transmitted signal from the overlapped signal. The team explained that it confirmed in the process that this technology supported the world's highest level of self-interference removing rate of 30 to 35 dB and transmission speed of 60 Mbps.

This technology can allocate twice more channels than the existing satellite communication system, allowing the transmission and receival of a large amount of high quality data using a limited frequency, thereby improving the efficiency of frequency usage up to two times. In addition, the cost of using the satellite communication repeaters can also be reduced by half.

The team has verified the interference removing technology using the VSAT equipment based on the satellite international standard and the Ka-band Chollian satellite. This technology is secured by global satellite companies, such as Viasat and Comtech, and Korean companies have had difficulties in entering the market because they did not have their own technology.

The team plans to relocate the technology to military communication and satellite communications equipment manufacturers and commercialize it.

Oh Duk-gil, project leader of ETRI satellite technology research group, said, "It is meaningful that we succeeded in securing the core technology that can improve the frequency utilization efficiency of the satellite communication system and in localizing the related equipment.”