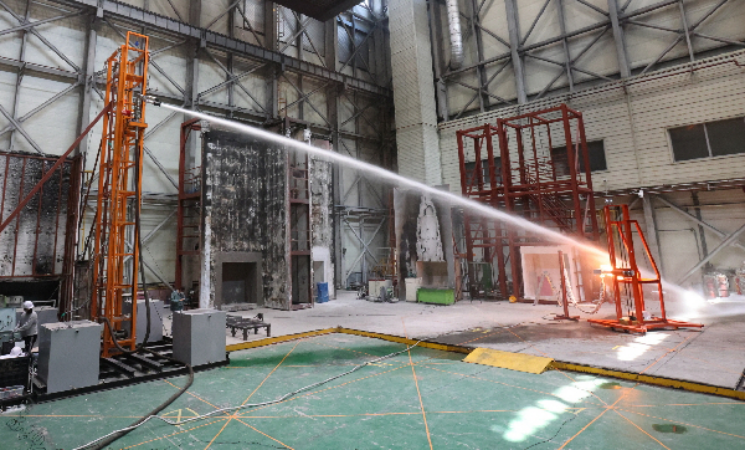 For the first time in Korea, the Korea Institute of Machinery and Materials (KIMM) has developed a technology that can extinguish fires by recognizing fire incidents at their onset and automatically spraying firefighting materials (water and foams) at the source of fire.

Principal Researcher Chung Jung-hoon and his research team at the Department of System Dynamics, part of the Mechanical Systems Safety Research Division at KIMM, have developed an autonomous fire suppression system that can quickly extinguish fires in their early stages.

This autonomous fire suppression system, designed for initial response in fighting fires, is a new-concept technology that can supplement the shortcomings of conventional fire extinguishing equipment. With this technology, at the onset of fire incidents, fire extinguishing materials are autonomously aimed and sprayed toward the fire source to extinguish the fire when it is still small. In this way, it is possible to fundamentally prevent the fire from spreading within the golden time, thus minimizing damage caused to surrounding equipment and facilities.

Sprinklers and other conventional fire extinguishing equipment installed on ships and buildings for fire suppression are designed to spray fire extinguishing materials entirely over a given space when a fire is detected. When a false alarm sounds, such equipment is set off unnecessarily, thus resulting in extensive damage. As such, they were often set to operate manually.

However, by learning to distinguish between fire and non-fire incidents using artificial intelligence (AI), the new autonomous fire suppression system developed by KIMM is designed to activate only in response to actual fires. Rather than spraying fire extinguishing materials over a given space entirely, it is designed to directly aim and spray at the fire source, just as a firefighter puts out a fire. As a result, minimal damage is caused to areas outside the source of the fire.

The new autonomous fire suppression system is composed of a fire detection sensor; a fire extinguishing monitor; and an analysis and control device that uses AI to determine whether an incident is an actual fire incident, estimates the location of the fire, and controls the fire extinguishing monitor. The KIMM research team’s design recognized fire incidents with a detection accuracy of 98% or more, and fire extinguishing water and foams can be sprayed up to 65 meters and 38 meters, respectively. Furthermore, test using the ship motion simulator and simulations using 3D Unity software and reinforced learning algorithm demonstrated that the newly designed fire suppression system operates normally even in sea state conditions of level 3 or higher, thus confirming that the system can be installed on ships as well.

This newly developed technology can be used for ammunition depots, munitions depots, aircraft hangars, logistics depots, and for various ships. By autonomously suppressing multiple fires in their early stages, this technology will be especially useful in the instances when fires occur simultaneously in multiple compartments of a ship as a result of being hit in combat. As such, it is very helpful in maintaining combat power and improving survivability.

Chung stated that the new autonomous fire suppression system is not only capable of reducing fire damage to human lives and properties, but is also important in providing effective countermeasures for the increasing decline in crew members of ships. He also added that, in addition to the military sector, the technology can also be installed in vehicle carriers, cargo ships, passenger ships, offshore plants, and high-rise apartments where fire ladders cannot be used.